Lessons Learned in Shipping a Static Site to S3

Lessons Learned in Shipping a Static Site to S3
Posted by Rachel Donovan, Steven Purr on June 29, 2016 in Engineering

A few months ago, the web development team at Articulate shipped a small microsite about our company culture, Life at Articulate. Given that it was just a few static pages, we decided to build it with good old fashion HTML/CSS and host it on AWS S3. “It will be easy,” we thought.

Minutes into development, we remembered the pitfalls of classic static development: CSS without Sass is horrible.

There are a ton of static site generators available for this kind of project. We considered the list of options on Static Gen, but ultimately they seemed like overkill. We landed on a simple compilation of gulp scripts to aid in our dev and deployment process.

The compilation included scripts for:

Once we’d chosen our tools, we buckled down and got started.

In addition to uploading Life at Articulate content to an S3 bucket as a static site, we decided to use a Cloudfront distribution (CF distro) to do two things:

Working with a CF distro also had other benefits—such as caching to improve the site’s performance.

We ran into a handful of issues, a few of which we’ll dig into here. At a high level, we had some trouble with the CF distro’s cache updating itself with freshly deployed content right away. We also ran into issues with default index page behavior within subdirectories through CF. Finally, we wanted to simplify the deployment process of the site for our developers as much as possible.

In this post, I’ll show you how our team worked through each of these points. Hopefully, you’ll learn something that you can use to build your own static site projects more quickly and easily.

During the initial creation of the CF distro, we noticed that the cache wasn’t updating during subsequent deploys to either of the buckets for the prod and stage site. We could see the new content when we visited the S3 bucket endpoint, life.articulate.com.s3-website-us-east-1.amazonaws.com, which led us to determine that the problem was with the cache itself.

A quick check of the CF distro showed that the headers weren’t being forwarded to the origin on each request. Only the cached content was returned to the viewer right away. Not forwarding headers to the origin on each request improves caching and overall performance, but it isn’t desirable if the content is subject to frequent change, such as on, say, a regularly updated company blog.

We changed the settings to forward headers on each request. This helped get new content out to the cache on each request after we’d updated the S3 bucket. Here’s what these settings look like on the AWS console: 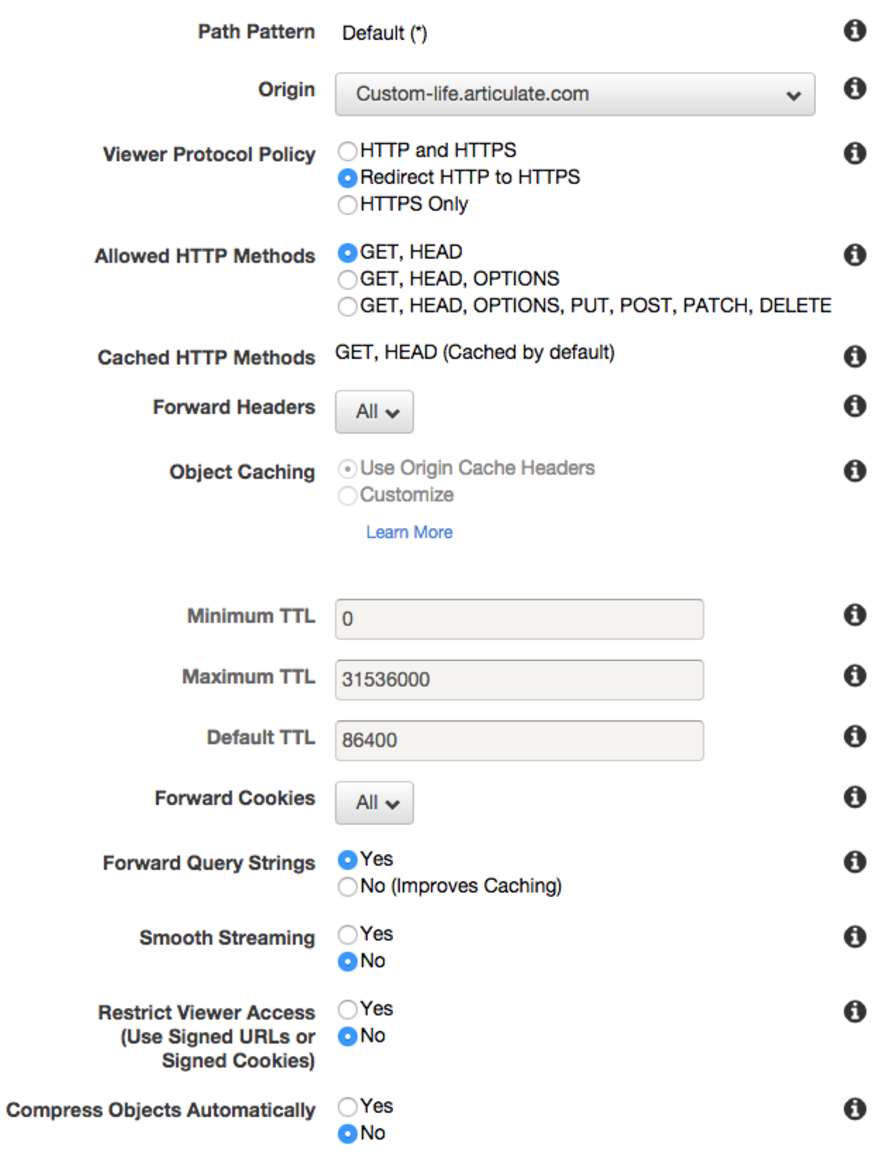 Forwarding the headers back to the origin on each request allowed our CF distro to check the origin for updated content and adjust the cache as needed. This allowed us to continue utilizing a CF distro without waiting  for the “time to live” (TTL) to expire for each object before newly deployment content was displayed.

Defaulting to an index.html page within subdirectories through the cloudfront distribution seems simple enough, right? It ended up being a “gotcha” for us. There were a couple of issues we came across when trying to set this up.

The first and simplest problem to fix was directing the S3 bucket to use the index.html as its default index document in each of its directories. Here’s how that looks in the AWS console:

S3 respects that setting not only in its root directory but also throughout its subdirectories, which is what we wanted. Like I said, a pretty quick fix.

Pages on the site that had subdirectory index.html pages weren’t displaying them, though. For instance, life.articulate.com/careers/ would display an error message. But when we visited the S3 bucket’s website endpoint directly, the /careers/ page loaded just fine. In other words, S3 was able to find the index.html page in subdirectories by default, but Cloudfront wasn’t able to.

It turns out that the type of origin we selected for the Cloudfront distribution was tripping us up. We had originally selected the S3 bucket to be the origin because, well, that’s the site from which the site was being served. Makes sense, right?

Unfortunately, by selecting the S3 bucket as our origin, the subdirectory index.html default document behavior wasn’t respected. To fix this, we had to create a custom origin that hit the S3 static site endpoint instead of directly hitting the S3 bucket. The origin configuration through our cloudformation repo changed from:

The combination of setting the index.html through the S3 bucket and using the custom origin through Cloudfront resolved that issue for us.

Deploying to S3 Locally with Jenkins Jobs and Hubot

During the early stages of development, we deployed to S3 locally via the gulp command. Eventually, we decided to move to a solution that was more secure and would cause less friction on the developer’s side. We created a Jenkins job and a hubot (we call ours “Botzo” at Articulate) command to do this.

The Jenkins job we set up clones the Github repo down to the build agent (based on whatever git ref was passed to it), runs an npm install to pull all the gulp modules down, and then works through each of the gulp steps to get the code ready for publishing to the S3 bucket.

Our job configuration has the following Execute Shell script:

We built several commands that we use to trigger the Jenkins deploy job in Slack. Here are some examples:

The build agents that handle the Life at Articulate site deployment Jenkins job needed to be attached to an IAM role. That IAM role needed enough permissions for it to delete/upload files to the S3 bucket, and some other permissions that the gulp module required. The minimum S3 Action permissions needed for the gulp publish job were:

Once that was set, gulp publish was able to do its thing.

Our simple setup had a few gotchas, but in the end it’s turned out to be great. We’ve already decided to use this setup in other small projects.

So, what’d we learn? What can you take away from this blog post and apply to the production of your own static site?

In summary, there were four main issues that we had to overcome to get the Life at Articulate site up and running. Here’s how we fixed them:

We hope these insights and lessons learned throughout our process are helpful. We really believe in providing developers with the tools they need to get the job done themselves as much as possible, and this project allowed us to explore and develop some new tools. It’s a great example of how Articulate’s focus on empowerment and autonomy can help developers get work done efficiently.