This post by Articulate Community Manager Jeanette Brooks features one of the Honorable Mentions from the 2010 Articulate Guru Awards. To see other award-winning courses from the Guru Awards, check out the posts here.

If you’ve ever wondered whether a robust and technically complex learning experience can be achieved with easy-to-use rapid e-learning tools, here’s your answer! Check out the following Articulate Guru Honorable Mention, developed by Eric Bort of Clearly Trained. 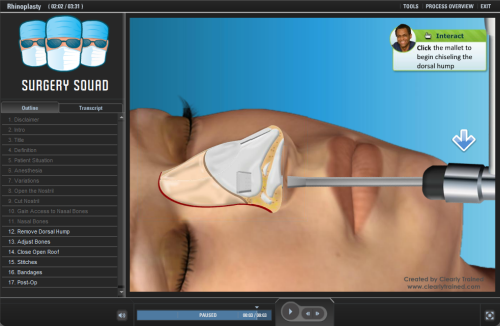 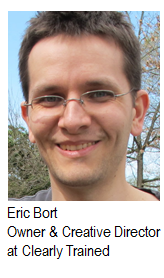 Eric’s company builds a wide range of e-learning projects, including the custom Flash courses available at Surgery Squad. He had previously crafted a custom Flash version of his virtual rhinoplasty course, but he wanted to rebuild it using only Articulate software. His goal was to create the same level of engagement and depth, without custom Flash.

The Articulate Guru judges all agreed that he succeeded! His Guru entry was built completely with the tools available in Articulate Presenter and Articulate Engage.

What wowed the judges? The uncluttered, easy-to-follow visuals, augmented with professional-quality narration, helpful annotations, and the friendly and humorous host character, all make the technical content easy to follow. And the interactivity really draws the learner in! Using simple PowerPoint hyperlinks and animations such as fades and motion paths, the course involves learners in performing critical steps in the nose-job procedure. Judges also liked the way the course makes supplemental resources available via two Articulate Engage interactions— a Labeled Graphic and a Process interaction — as tabs on the top edge of the player.

Below, Eric gives us a behind-the-scenes look at some of the techniques he used in building the Virtual Rhinoplasty course:

Using layered images and an avatar to guide the story:

“One of the aspects of this course that makes it function well is that most of the graphic elements aren’t a single finished image; rather, each screen consists of many objects that are layered on top of each other. PowerPoint has a useful tool called the Selection and Visibility Pane that allows you to manage the objects and layers on your screen. Here’s how it works:”

“A benefit of layering images is that I was able to create a realistic sequence where my character could be an avatar and talk to the learner. Rather than just put a single static image of the character on the screen, I used a series of images, showing the same character in different poses. By sequencing these six still shots, my character goes from happy, to serious, to talking, to happy, to excited, to happy. You can get images like this with the backgrounds already removed from www.elearningart.com. They even have a set of free images that you can experiment with.”

“I was able to create interactivity through the use of PowerPoint hyperlinks, multiple slides, and motion paths. In several parts of the course, the user is given an instruction like: ‘Click the retractor to open the nostril.’ When the learner clicks the retractor, the nostril opens and a few other instruments go into motion. We used the same technique that Tom Kuhlmann did in his frog dissection demo. Basically, a series of slides enables the action to take place when the user clicks a hyperlink. The following screencast gives a walk-through of how it’s done.”

“One other nifty tool I used in Articulate Presenter is the Annotation feature. You might not be aware that you can cause multiple annotations to appear at the same time on a single slide. This was particularly useful when we wanted two different annotation arrows to point to each side of the nose on our ‘Infracture’ slide. It’s easy to do this — once you click Add Annotations on the Articulate menu in PowerPoint, you just follow these steps in the Annotation window to apply multiple simultaneous annotations:”

Great job, Eric, for building such a compelling and interactive course. And congratulations on winning a well-deserved Articulate Guru Honorable Mention!

Thank you, Eric, for such a superb example and for the clear, concise demonstrations in PowerPoint/Articulate! Your Web site is an inspiring treasure trove of surgery simulations that appear to be aimed at consumers rather than medical professionals. The idea of involving the prospective patient in a simulated surgery is highly engaging and empowering. What a excellent approach!

Great job, Eric, and an excellent example of the types of courses you can create with a simple, rapid, tool.

Hi Eric, This course is great and I love the interactions and the graphics. What software did you use to create the amazing graphics of the patient?

Agreed, great job taking a procedure that can be difficult to explain to patients and illustrating it in a way they can better understand.

Great inspiration for my upcoming new course. Love it!!
Ranjana

Thanks everyone! Most of the graphics were either hand drawn (tools), or 3d renders of people (you can buy models pretty easy these days). A lot of the graphics were then blended together in flash using masks, photoshop, filter effects, then exported and inserted into Powerpoint for the final product. And, if you haven’t already please check out http://www.surgerysquad.com for some other great procedures including C-section, dental fillings, hair transplant and more!