Why You’ll Be Psyched About Mike Enders’ Bronze-Winning Course

Picture this: you’ve set out to create an engaging e-learning module on a scientific topic that’s potentially sensitive. And you need to make it compelling enough that college students will learn and remember the content. Oh, and you only have three days to build it!

That’s the challenge Mike Enders took on when he decided to enter the 2010 Articulate Guru Awards.

Mike is a psychology instructor at Northcentral Technical College, and he’s also an e-learning developer. His goal in entering the Guru Awards was to leverage the Articulate tools to create some great content for a higher-ed setting — and to do it super-quick. (After all, it was early August, the Guru deadline was just a few days away, and Mike had fall semester to prepare for!)

His course, Psyched in 10, took home a Bronze Award. Take a look: 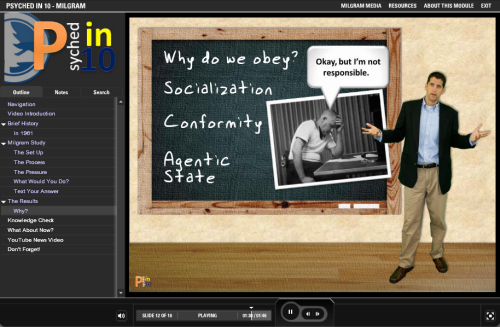 Cool Features in Psyched in 10

Judges said that Mike’s course reminded them of a high-quality PBS educational show. He made great use of Articulate Presenter, Quizmaker, and Engage to build a fun, quick-paced, informative course. Here are some of the things that really stood out:

Great Video Intro
The short, peppy video at the beginning hooks you within the first 60 seconds. The amazing thing is, Mike shot and produced the entire thing solo! Though he originally planned to enlist help from a colleague who’s skilled in video production, time was short because fall semester was approaching — and his colleague wasn’t available on the day the shooting needed to be done. So Mike created a makeshift studio in the campus library: he gathered a tripod, a lapel microphone, and a high-def video camera, and he started filming.

After recording the video, Mike used After Effects to combine the video with background audio (which he created for free with Myna). He also added a short series of still shots — his colleague had taken these for him in front of a green screen, so that Mike could easily remove the backgrounds and place the pictures on top of the chalkboard image. The result was an engaging FLV that sets a great tone for the whole course. 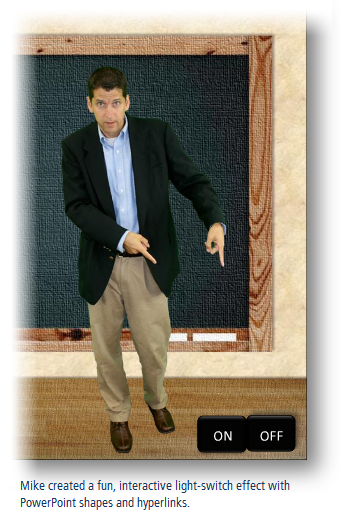 Clever Effects with Hyperlinks and Animations
After you view the video intro, you move right into a quick history lesson about the famous Milgram experiments, complete with a 1960s-style filmstrip and projector. But before you can watch the film, you need to help out by dimming the lights on slide 3. The light switch Mike created is a simple, fun effect built with PowerPoint shapes and hyperlinks. (Notice what happens if you try to turn the lights back on during the film?)

The film itself is actually just a series of images, each animated in PowerPoint and synched in Presenter to appear at just the right time. And the projector light? That’s another example of Mike’s creative use of PowerPoint shapes and animations. Check out how he did it in this screencast: 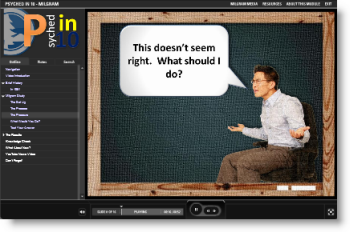 An Engaging Storytelling Style
Mike’s knack for storytelling, combined with intuitive images, animations, and annotations, makes the content memorable and easy to learn. Spend just a few minutes viewing slides 5 through 9, and you’ll feel almost like you were there in the room when the Milgram study was being conducted.

Creative Use of Web Objects
Another cool feature of Mike’s course is a Web Object that lets the audience share their reactions. So, not only do students get to learn the course content in an engaging way, they also get to compare their own impressions to what their fellow learners are saying, real-time.

Here, Mike explains how he added the Web Object to his course:

Functional, Intuitive Toolbar Tabs
The judges also liked how Mike incorporated supplemental information in the toolbar tabs of his player. He included three different Engage interactions (a Media Tour, an FAQ, and a Process interaction) to bake in several helpful details that learners can explore if they like. 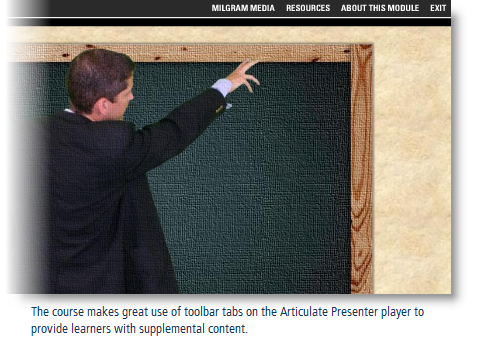 We asked Mike to share some thoughts with us about building his award-winning course:

Tell us a little about your course and why you built it.

“I’d been knocking around the idea of doing some short presentations for my psychology students. I’ve always done basic voice-over Power Point lectures, which are longer and reflect the content of a typical class session, but I wanted to provide something a little more focused and engaging. 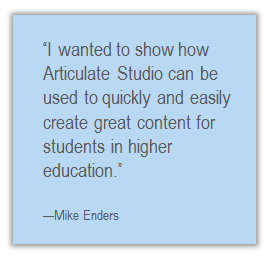 “When the Guru competition came along, I decided I finally had a reason to develop my first ‘Psyched in 10’ module — a quick, fun learning object that would teach an important topic in under 10 minutes. I wanted to show how Articulate Studio can be used to quickly and easily create great content for students in higher education.”

What role did the Articulate community have in inspiring you to enter the Guru Awards?

“Some recent conversations in the community forums really struck a chord with me. The gist was that it’s easy to stay in the background and learn from the community, but for a community to thrive, we all have to take our turn giving as well. Like many others, I struggle with doubt and anxiety when it comes to publicly displaying my work (what will others think?) so I tend to stay in the background and soak up the information being shared. But I also realize that growth comes from feedback and sharing within a community of practice, so I decided it was time to put myself out there.”

Tell us about how you designed your course. 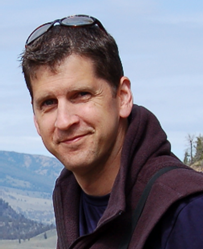 “I wanted to keep the cognitive load low and the pace quick, so the overall style is fairly simple. I followed the approach of a former colleague who firmly believed that all a good teacher needs is a blackboard and a piece of chalk!

“While that might seem quaint by today’s high-tech classroom standards, her approach worked because she was a fabulous storyteller. So my basic design approach was much the same. Just me, the story, and a blackboard. And a really cool old-school film projector!”

Did you use any specific resources from the Articulate community to design or build your course?

“Definitely! Much of the course is the result of great ideas I borrowed. For example, when I started the project I had just seen a screencast from David Anderson about creating a convincing background scene for an e-learning scenario. It was great timing, because I needed that! Also, some of the PowerPoint 2010 features I’ve learned from Tom Kuhlmann, and workflow tips from Jeanette Brooks, had a big influence on this course.”

What are some of your favorite Studio ’09 features?

“Though I didn’t have time to really pump up my quiz for this particular project, I’d have to say my favorite Studio ’09 tools are the ones in Quizmaker. The powerful timeline, the branching options, and the ability to insert all sorts of media have really motivated me to start using Quizmaker more as a presentation/branching tool and not just a quizzing tool. I think Quizmaker is really a killer application.”

What course-building tips can you share with the rest of the Articulate community?

“To be completely honest, I love the creative process and my personal challenge is to make myself focus on the small details that are easy to overlook. I figure we all have our personal kryptonite issues, and it’s important to identify them. What are the most common mistakes we make time and again? Is it spelling? Forgetting to compress pictures? Not labeling items in the selection pane? Perhaps animation issues? As I’ve identified some of these in my own work, I’ve built a quality control checklist to use as a reference during the review and production cycle. It can come in really handy when I’m trying to work quickly and meet a tight deadline.”

Part of the prize for each Guru Award winner is a free Articulate Studio ’09 Pro license for the school or charity of your choice. To what organization did you give the license?

“I’ve donated my license to Heifer International. My family and I have been giving to Heifer for years and absolutely love this charity! They provide livestock and training to the poorest of the poor around the world. The individuals who receive livestock are not only able to begin supporting their families (by say, selling eggs), but they are then able to pass the gift on (via baby animals) to their neighbors as well. ‘Teaching a person to fish’ – this maxim is so wonderfully followed by Heifer.”

Any other thoughts to share with the Articulate community?

“We are unbelievably fortunate to have the support that we do. Name me another company that has a community where one can not only learn the software and receive lightning-fast support, but also learn how to successfully use the tools within a professional field of practice. I can say without a doubt that the Articulate community is the number one reason that I’ve been able to start and grow an e-learning freelancing business.”

I just love this course. It really kept my attention and was wonderfully constructed. And it was a fascinating topic. I’d love to take a full semester of on-line courses from Mike if they were all like this. Kudos, Mike.

I’m a sucker for not only a good story, but one that’s well-told, entertaining, and in this case informative. I wonder if that same experiment was done today if it would return the same results…

Thank you for the kind words folks. Kevin, due to ethical guidelines instituted since the original experiment, it wouldn’t be recreated in full in the present time. However, research studies that have tweaked the experiment slightly, have been done…here is a sample….

The interview was absolutely inspiring! Especially the part about course building.

This lesson left me wanting more more more! Loved the techiniques and new ideas. Thanks!

I want to know how do you customize the branding of articulate logo at the far top left. Please respond.

Rock on you did a wonderful job!

Hi Rene – here’s a tutorial that explains how to add your own logo to the sidebar of a course in Articulate Presenter: http://community.articulate.com/tutorials/products/adding-a-logo-to-the-sidebar.aspx

This is a great presentation. Mike where did you get the projector graphic from??

Sorry that I missed your question. In addition to Jeanette’s link, I should note that I created the logo in PowerPoint.

Way to go Mike, great stuff. You have created a piece that I feel is highly engaging through your creative efforts.

Well done Mike. I did recently see the experiment in a Dutch Science museum (30 minutes video only), but this is much better. Great idea’s and well done!

“… We are unbelievably fortunate to have the support that we do…..”

Wow if Mike only got the bronze, what on earth got the gold award??!

Excellent ideas and presentation – quirky yet full of substance, loved it!

Mike,
Great stuff, I am just getting into developing more dynamic content for pistolcraft. Your presentation jumps off the page with a lot of ideas!
I learn best by Go-by’s (sic. examples) do you have this or other articulate projects in a zip file to look at the triggers, content etc?
I am looking at producing some material that is heavy on video.